Dogs on the sports field, what do you think? 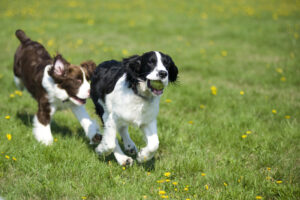 The failure of some dog owners to clear up after their pets has been a long running issue in Tregony. In particular, the use of the sports field by dog owners has been, and still is, contentious.

It is an issue that divides the community in that some people enjoy being able to exercise their dogs on the field and they act very responsibly and clean up any mess left by their pet. Other people think that there is no way that all the mess can be removed because the dog owner may not see where their dog has done its business or, in some cases, the owner simply does not bother to do anything about it. Consequently, some people think that dogs should be banned completely from the field or that restrictions should be imposed such as dogs only being allowed on leads.

The parish council has tried various measures involving posting notices about the penalties for dog fouling, spray painting on the pavements where dog mess has been left, and also imposing a ban on dogs on the sports field from dusk to dawn.

The parish councillors had hoped that more members of the public would attend the meeting and express their views. But this did not happen and the parish council deferred making a final decision. Some years ago, when a similar ban was proposed, many dog owners came to the parish council and offered to operate a voluntary system of monitoring what happens on the sports field and clearing up any mess found. This seemed to be effective for a time but the situation seems to have deteriorated recently.

Before the parish council makes a final decision on what measures to take, it would like to hear more from local residents about what they think about the issue. Do you think that dogs should be banned completely from the sports field? Do you think that dogs should only be allowed on leads? Should dogs be banned from the football pitch area but allowed elsewhere? Would you be willing to be a volunteer monitoring what is happening on the field and trying to help the situation? And so on.

We have set up an online survey using a system known as Survey Monkey. We would be very grateful if as many as possible of you complete the survey. Follow this link to the survey.

The closing date for responses to the survey is 15 October. After we have received and analysed the responses, a report will be brought to the parish council meeting on 8 November with a proposal for what is to be done next.

The Church Hall has published updated information on when it is open to serve as a Warm Hub for local residents. See Warm Hub Feb 2023

Royal Cornwall Hospitals NHS Trust has launched a Patient Leader Programme.  They are aiming to put the voice of patients, carers and families at the heart of everything that they do and to work in partnership with people and communities.  Volunteer Patient Leaders...

Christmas trees left on the Giggan

It has become the practice over the past few years for some local residents to leave their redundant Christmas trees on the Giggan in January and Cornwall Council waste collection service has picked them up from there. However, this year, the Council announced that it...